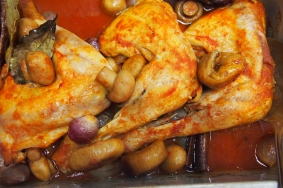 1. Place the chicken in a deep baking tray with bay leaves, Ceylon Cinnamon, and figs.

2. Put the shallots in a bowl and cover with hot boiling water about 2 minutes. Drain with cold water and peel away the skins.

4. Slowly pour over the cooked shallots and mushrooms into the tray. Season with salt. Cook in the preheated 170°C oven for 1 hour.

5. Take out the chicken and keep in a warm place. Blend cornstarch with 2 tbsp cold water and stir into the braised liquid. Sugar and salt to taste if needed.

6. Arrange the chicken and ready to serve the mashed potatoes or with green vegetables.

I love this recipe so much because the figs combined so well with the sweetness and fermented taste of Ceylon Cinnamon. These are the main ingredients. We can further add in wholegrain mustard or black peppercorn if you prefer a hint of heat aftertaste. 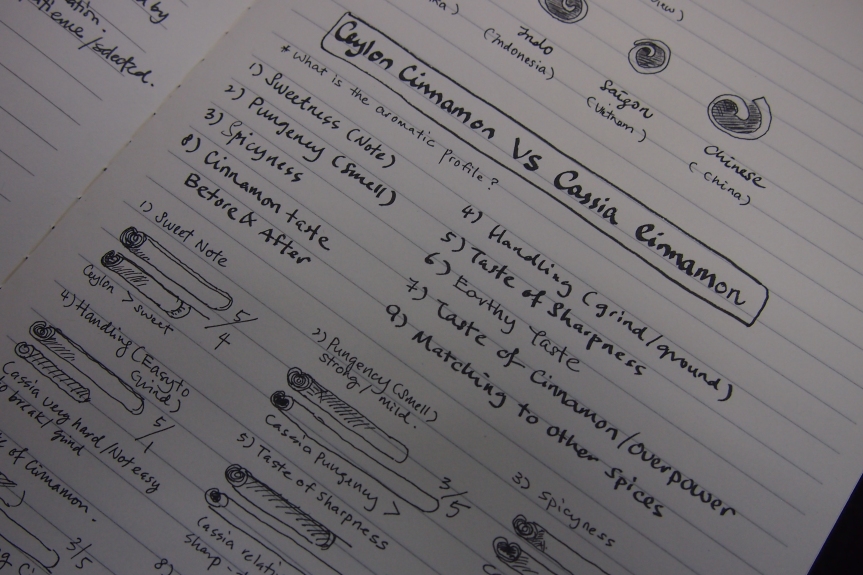 Many types of Cinnamon are available in the market, which one is the real one we are using? Most frequent question after we have learned about the varieties of Cinnamon and the health concern about “coumarin” contain in Cinnamon. “Coumarin” is a kind of natural chemical substance comes with the plant. Here, I believe that everybody can search the net; it is easy!

Many years ago, the Indonesian Cinnamon dominated the whole local market, and not many people know about Ceylon Cinnamon. The real cinnamon for everyone is Cassia Cinnamon, our household taste in daily cooking. The Ceylon Cinnamon from Sri Lanka is a newcomer. People valued it as another kind of cinnamon, less pungent, expensive and doubtful about its potential. I thought I had a wrong starting point. I was in a state of selling shoes at a place where people is barefoot, different knowledge and unfit to local custom, but I believe it was a great business opportunity.

My first encounter about Ceylon Cinnamon had changed my life. I had a deep feeling about Ceylon Cinnamon, and I always use Cinnamon as my opening topic when I do a sales talk. However, I remembered one occasion that I was so embarrassed where I was trying to show my best Ceylon Cinnamon to a France Chef, many years ago. Unexpectedly, she turned down my conversation because she could not accept the smell of cinnamon. No matter it was Cassia or Ceylon. I made another appointment and cleared out all my cinnamon from my spice bag before the next meeting. I learned that Ceylon Cinnamon is my personal preference spice, but not the absolute for others.

The point I would like to highlight is “Authentic” flavour. The value originally used by the people. The “Original Flavour”. The selected ingredients or method of cooking which forms a genuine character. In other words, “Authentic” is a part of people living pattern. The way we eat and our lifestyle. Some people may have a different experience and changed the original taste. Therefore, the flavour is a complexity of living. It is beyond our ordinary senses, a creation of many things.

Now, I have majority customers use Ceylon Cinnamon because it is real, sweeter aroma, good for health and it is the diabetic medicine from natural remedies. So, my clients like the Cinnamon? Do they change their original eating behaviour?

Authentic cinnamon is not the important matter because we value the facts in reality. The aroma and taste of Cinnamon are the secondary consideration. The flavour differences are strictly the cooking concerns.

Last, before I put an end to my Cinnamon topic, I share my real life experience with you. I like Cinnamon because it smells good and comfortable. I use it in my cooking recipes. My favourite masala tea with Ceylon Cinnamon. Try to love spices and discover the natural flavour. Search for your spice starter.

1) Mix all ingredients in a bowl and rub on pumpkin slices.
2) Place the pumpkin slices on baking tray, bake it in the preheated
200°c oven about 30 minutes.

I like this recipe because the preparation is easy. The fun of this recipe is the twist and match combination of oregano, rosemary and thyme.

If we search “Cinnamon” on the internet, we will find tonnes of cinnamon related information. Many stories inspired by Cinnamon, trades, foods, drinks, lifestyle, memories, health, history &, etc.

My Cinnamon story began from Sri Lanka; my very first spice guru who brought me into spices business. Sometimes, I thought that “Cinnamon” naturally is given a miracle power. An ordinary tree that we have used it since 2500 years ago.

My first encounter about Cinnamon is not because of its medical benefits, without any idea about Cinnamon; I discovered that it smells comfortable and relief, I believed the sweet flavour caught me in the first place. I remembered that my wife and I were on the way to down south of Sri Lanka. We took a rest halfway because of motion sickness. We spotted some workers were working on some wood craftings. The wood smelled so good that I forgot I was motion sickness. I never thought that was Cinnamon. Maybe it cured my dizziness. That was my first experience about Cinnamon.

The other thing amazed me was the process of making the quills, it is so labour intensive. I could not believe that Cinnamon stick must be hand crafted. My spice journey started here. I would like to say that was a fantastic coincidence.